Per the calendar, this meeting will be SAT:

[ find the whole story in this thread ] – Short story : 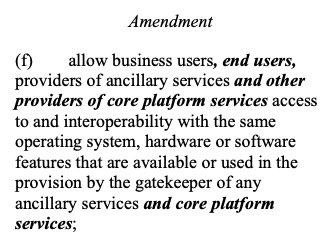 This amendment would be reaching a first goal for the Policy Group.
I was in Strasbourg last week as mentioned, talked with Jan Penfrat of edri and afterwards @CristinaDeLisle and me did a short meeting.

We are asking for your feedback again:
Prabhat Agarwal wanted to have a call with me at 29th of July.
He is the EU Head of the Unit, this is a nice article about his work in german …
He wants to learn about ActivityPub and so maybe a small group can explain and dream a littlebit.

So, esteemed Policy Group and everyone interested!
Please attend the meeting or leave your remarks, suggestions, questions, input here …

Hello! I wanted to let you know that something has come up and I can’t make it to the meeting tomorrow. Will it take place after all? Thank you and sorry for not being able to make it.

No worries.
Yes, your proposed meeting took place.
On Tuesday we will have a physical redaktor team meeting at Gruner&Jahr.
The talk with Agarwal is Thursday, 29th as said …

I had an informal meeting today with @Sebastian to understand more about what is going to happen tomorrow. He confirmed the following:

I am tagging @aschrijver as he was as well added in some private messages and I want to make sure this reaches him.

In rest, I propose to keep in touch and I look forward to see the outcome of the meeting tomorrow. Viel Glück, Sebastian!

I hope all is well. How was the meeting this morning?

I’m very curious about the outcome and what feedback you have.

I look forward to hearing from you.

• If amendment 51 will be decided, The Digital Markets Act is demanding compulsory interoperability from hypercapitalistic surveillance monopolies to the end-user.
For example twitter stream → mastodon

• The Policy group wanted to create a good lobby with edri and amendment 51 is a first goal.
ActivityPub to be the Interoperability protocol for the Digital Services Act (the law “to create a safer digital space in which the fundamental rights of all users of digital services are protected;”)

So, I talked with the EU Lead:
• The Commissions proposal by Prabhat was ready and now amendment 51 entered the legal board.
For the law there will be compiled 3 forks: 1 Commission, 1 Parliament, 1 Council …

Minutes of the meeting with Prabhat Agarwal

We had a supernice talk in german language which was about 50 minutes.
We decided to say “you” to each other [<- joke about german language *(1)]
First we did short introductions:

He grew up in Hamburg, studied physics and earned a doctorate for core particle research.
Agarwal worked for DESY and so he was present when the CERN was birthing the www.
He was active in the very first dev phase of the web.

After a period in Horizon “future and emerging tech” he was working in the Netherlands for Phillips (semiconductor technologies).
Then he worked in standardisation and changed 2012 in the Netzpolitik (“network policy”).

Now he is EU Head of Unit and has the lead management for the DMA and DSA.

First, I quickly summarised the current threat of GAFAM hypercapitalist-monopolies from my view as journalist.
Then I described ActivityPub and all of its possibilities, motivating use cases.
It really seems to be a common misconception that mastodon is an equivalent of ActivityPub and so we should work more towards presenting the whole diversity of ActivityPub software, projects and the spritely future.

I gave an overview about the history, the vocabulary and the protocol, the world’s leading federated social web standard …

The named links were

← “we answer anything here”

Finally I mentioned the W3C Social CG and the Policy SIG meetings.
And I outlined the vision of an EU funded Fediverse of trust and tried to describe “generic servers / diverse clients” and the different motivating use cases.

One question where I was a bit unsure about [Please help, your opinion?]

“Do you think ActivityPub can also mean interoperability in messenger service” –
I thought, realtime communication is maybe not the primary AP use case but named ActivityPub/mastodon bridges.

In the second part, we talked about the Digital Services Act and implications.
The amendment 51 is a great chance and it might get a good majority in the parliament.
Prabhat said that “not only” Woelken and Breyer worked on this amendment, so we should look for everybody involved.

I tried to raise awareness for “Fördern statt Fordern” which means that you can’t only demand interoperability as a government but must also fund it.
And I re-iterated the idea of an EU funded fediverse, an idea described e.g. already in the german parliament by MdB Anke Domscheit-Berg …
Prabhat was very open and confirmed my impression that the commission in general finds it difficult to fund Open Source.

“This has a long history and is a known flaw.” […] “Some of us became distressed.”

He named the case of Minitel France which was an alternative to the net but not used.
I answered that the opposite is the case cause ActivityPub is a worldwide standard and W3C recommendations.

What I found very useful was the argument of how much the protocol was supported with US money …
I think, it is received now that also the EU has to support worldwide standards.

Agarwal acknowledged that to reach Interop within DSA, a “Technischer Unterbau” (technical foundation) has to be funded.
We agreed to this as action point.

We also quickly talked about the DID specification and I said that also the W3C DID WG would like to meet with him.
He is not directly responsible for eID etc. but will relay it.
Preferably would be a joint event, which could, as said, be together with edri.
Prabhat confirmed that edri is well connected to all policy makers etc.
If no “legislative process date” he would attend the event.

Prabhat said “It is a big success of the ActivityPub Community that it is known and debated in the parliament.”

How will the legislative process go on?

As said, it will be a long streak.

Prabhat thinks that the votings in the “Ausschüsse” [boards (?)] will take until December/January.
Then the parliament and European Council (“Rat”, member states) will do their “forks” of the law.

And then all 3 proposals will be written together.

“Free from the liver” (Günther Oettinger)

and “We are all sitting in one boat” (Günther Oettinger) 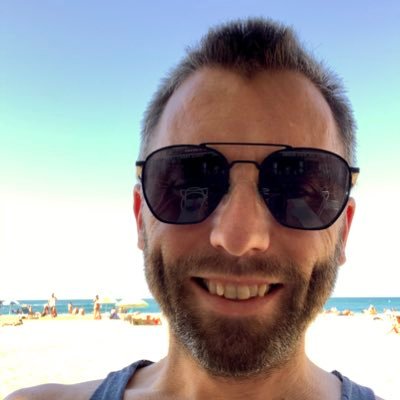 A video about the matrix coalition: Matrix Live S07E03 — Matrix Will Change the Law? - YouTube

will start in 2 days: Home | Internet Governance Forum
While I booked flights, now new quarrantine rules are in effect and so probably attending virtual.

Yay!
Just wanted to share some articles after the EU parliament voted for mandatory interoperability and what we can do now …

The new version of the text includes obligations for the interoperability of messaging services and social media. “Consumers will not be forced to use a specific messenger but will be able to cross chat between different applications,” said social-democrat MEP Evelyne Gebhardt.

In other words, a message sent on WhatsApp might be received on Messenger or Signal and vice versa. The Commission would have 18 months to set up the appropriate technical specifications.

“Technically, it’s not really complicated. What you need is a protocol to send and receive messages, a standard to make networks interconnected and interoperable,” added Kolaja.

The Digital Markets Act legislative proposal has been endorsed with an overwhelming majority by a key European Parliament committee and will now be voted on in the December plenary session.

Unfortunately I could not find a good english article about what it means for ActivityPub, so [also regarding the new strategy for new the german government], I beg that you somehow translate this supernice article by Dominik Piétron

Regarding the meeting of the Interop Group, the minutes are here admin/minutes.md at c73222b2e60e61372a37bb41ed4dc03da1f8b607 · interop-remedies-cg/admin · GitHub
I think, Marks’ idea of writing 1 guide for Policy Makers can be much more powerful than if 1 person always travels to Brussels or Strasbourg or asks trick questions at the press conf or talks with the Tech Lead (see above).
Personally, I’ll now inform Jan Penfrat of EDRi about the group but it becomes pretty clear that this group will not come up with anything very quick.

For me, the question is, how to lobby on.
Vitorio has co-built a strong coallition where mostly messenger communities are in, the matrix coallition:

Unfortunately nobody within the W3C gives official technical expertise to the EU for webstandards.
Only GAFAM does, but in their own interest.
But DMA gets real now.
Any solution for the next 18 months ?

This is great news!

The fact that people overload things is a barrier to interop. An important one is person vs page. e.g. you can like Ricky Martin’s home page without liking Ricky Martin. In mastodon the person and the page are the same thing. In Solid they are not. This is a 10 year long standing interop hurdle.

Then there’s the message format. Is it JSON, is it JSON-LD, is it XML, is it turtle?

Then there’s the semantics. Do we have actors or agents, are relationships one-one or one-many, Do we have nested objects

Next is authentication. Do we all go through a trusted third party? Do we use a JWT. Are we allowed to use public keys?

Privacy and scope are going to have to be coded into all the different apps, all done in a different way. This is the authorization problem.

Then there’s encryption. How are you going to send an encrypted message from one thing to another and who is going to get to look at the keys.

We’ve not even talked about network connectivity. How does one device connect to another, and get through a fire wall. Skype has its own system for this.

I mean you really need to know what you’re doing, and also know these systems well to create even a hand-wavy high level spec. But the devil is in the detail. Then it’s getting engineering teams to agree.

So, seems like a great initiative, but boy is that going to be hard. Maybe the win would be to get someone from each engineering team to sit down at a table and share ideas. 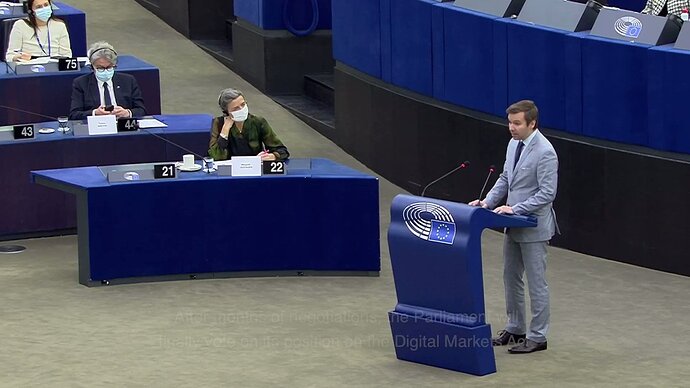 @PiratKolaja
We can establish a market with more privacy friendly services to choose from. It’s just a matter of decision. A decision that Europe has to make. And the opportunity is now. https://t.co/rUrCq1lcDg
1 Like