There are a few sites listing decentralized (web) projects. However, increasingly over the last years the space has become crowded with projects that are incentivized to sell proprietary tokens, to fund their development (plus other items).

I feel there’s also a strong ‘open’ community that exists, that wants to work on open solutions, that are non-proprietary. The idea of building open source, without proprietary monetary systems, or proprietary networks. I use the term proprietary to mean “property of”.

Examples are ripple which was 100% proprietary, and branched out into their so-called open protocols such as webmonetization which drive traffic to their token sales. Similarly ethereum had a covert 70% premine, which was discovered later, and a marketing department that drives (mainly gamblers) to their token sales. Additionally, IPFS has IMO morphed into a system that drives users to purchase their file coins, they even promote it on their twitter feed. This kind of token spam means that you are incentivized to put yourself in dweb lists, and the grass roots get crowded out. We also see this here invading projects like peertube and the FEPs.

I feel that there’s a good grass roots community wanting to build software to better humanity, and the fediverse started out in this spirit. Im sure I’m not alone in wanting to contribute to projects but not see some centralized entity profit, either overtly or covertly.

To this end, this list was made (not by me), to cover projects, and it seems quite a good one. I personally love nostr, and helped create solid. But there’s room for multiple approaches in the space. I think it’s inevitable. My hope though is that the non proprietary solutions can first be identified, and afterwards, work together, possibly via bridges. 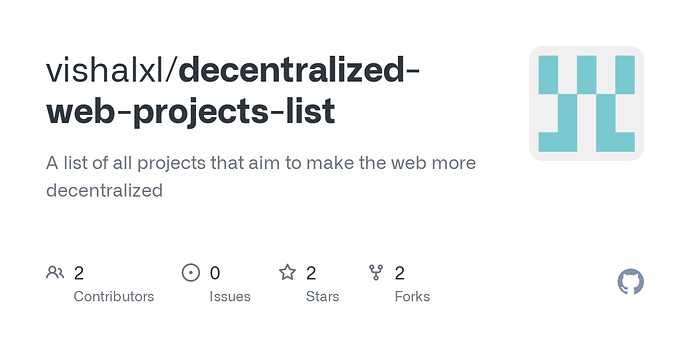 Here’s the list, see what you think, if it can be improved, projects added.

Thanks. I posted some AP-related info in