On the Fediverse Town community forum in a topic talking about nice-to-have @mastodon features, I proposed a “Watch Post” functionality whereby you get notifications about any updates in a conversation, not just the branch of the thread that you interacted with. I also sent a Fedi Poll to gauge interest for such feature (currently 85% of 41 people in favor).

@macgirvin of #software:zap just responded to the poll, and I want to quote that here. Both for the record, and because of its relevancy in our quest for a more interoperable fediverse.

#Fediverse does this happen often to you too?

You found a great post, commented to it, only to find out later that a broad discussion was triggered … but not on the thread branch you commented on.

So if you didn’t bump into it coincidentally you’d be totally unaware of that.

The issue is essentially that there is no standard method for fetching a conversation and all its replies from the root of the conversation. We’re using ‘context’ for this purpose as well as identifying children of the same thread for conversational views. Fetching this collection with a signed request automatically subscribes you to followups (unless the original post had a protected or private scope; in which case you won’t see it anyway). You are also subscribed to followups if you manually fetch any single activity with a signed request (by pasting it into the search bar). This allows us to propagate edits and deletes and poll updates to everybody that fetched the original; which is another long-standing federation issue.

As for the ‘context’ mentioned, I found this topic to cross-reference: Context vs conversation

PS. The “Watch Post” feature is already implemented in Friendica and Misskey.

One thing that often happens in threaded conversations is that people just respond to any entry in a conversation thread without reading the preceding conversation in other branches. This leads to a lot of repeating of stuff already discussed. In the Poll thead related to this I already dropped the link to this SocialHub topic multiple times.

Here’s the @Chartodon diagram of the thread so far (credits @ColinTheMathmo@mathstodon.xyz) : 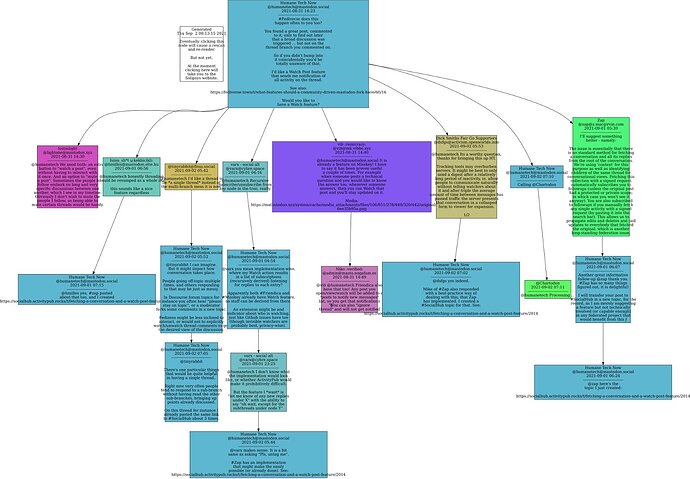 Note: That chart has been updated … the latest version is here:

I will update it sporadically over time.

What would be really great to see on this, especially given @macgirvin’s reply, is a protocol.

I’d suggest a FEP or if people don’t like that (I still can’t login to git.activitypub.dev), I’d fork Bitcoin’s BIP process into FIP and go from there. Standards don’t have to be perfect, or adopted by everyone immediately, they just need to exist to help projects converge where the benefits outweigh the costs.

Smithereen solves this in two ways. Firstly, the instance that hosts the top-level post forwards all LD-signed Create{Note}s to everyone else who has commented on that post (on all nesting levels). Secondly, I fetch comments recursively when the post is loaded either at the request of a user or as a result of an Announce. Here’s that thread as loaded by my instance: #Fediverse does this happen often to you too? You found... | Humane Tech Now

Problem is, not all software presents replies collection on posts. Notably, Pleroma and Misskey do not.