Following the death of MP Sir David Amess, MP for Leigh-on-Sea. There is now talk about the problem of online hate speech / online abuse of MPs , staff and other groups)

One of the things that will probably come out of this is the topic of Anonymity on line, as I put in my previous post, this needs to be maintained to protect activists etc. Laws could end up forcing social media to act on this issue.

If the fediverse could perhaps implement some sort of ID module that can be a plug in option for servers, so users on that server HAVE to prove who they are for example. This could be a welcome feature.

Helps professional people be on here and benefit from being here.

As the fediverse expands there may be groups that join where users should be verified, to maintain the integrity of the group and importantly the fediverse, a few possible examples.

Perhaps a University student group, who want to an Open way for students to join, so sign up , and say upload your student ID for example.

Maybe other groups such as naturist groups you have to be a member of some national naturist club to sign up or to attend sessions , So in the UK you would need to be part of British Naturism, in order to be able to sign up, Which of course would have it’s own ID card.

So there are quite a few examples of how this sort of system would be useful. But, these are positive use cases we can’t just think people are bad people, but it helps those who are ‘good’ people who have no problem with ID checks just sign up and be part of these communities.

We also want to encourage groups to run their own servers, so this would simply be some sort of plug in module, and then form part of the terms and conditions, so don’t like it, you can’t join. It is NOT discrimination as that person can set their own instance up or join one where that is not a rule, but thanks to federation that group can also block other services that don’t implement these checks (or maybe warn users that is the case).

If this can be implemented simply it may avoid the issues I mentioned at or used as a replacement to verify people as users.

Doing this could also be a pre-emptive strike at a solution otherwise we will end up with something that is barely workable being forced on us.

Just a thought, and sorry for the long post.

First off and very direct:
I find the “Sir” David Amess debate very bizarre.
As a journalists I have researched Islamism and Daesh (IS) for a long time.
Daesh tries more and more to influence and misuse mentally instable/ill humans to use them as weapons. Amess was maybe a target cause of his Iran criticism or whatever, but:
This happens online the same way as offline (witnessed).
I do not understand what ‘this crime against humanity’ has to do with online-hate at all …
[am not an ukpol expert]

Just if other people do not know who MP Amess was: 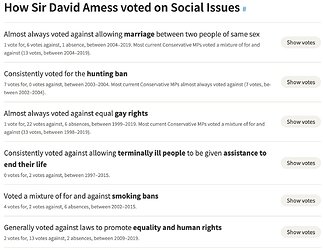 What you describe is probably Decentralised Identifiers and I am super with you.
I want to emphasize that everyone can register methods, e.g. see the ORB method …
I want to mention again that such is also a MUST if ActivityPub would become an interoperable protocol within DSA/DMA (see DM, will update public DSA/DMA post soon).

Also, I want to emphasize that 1 user can have multiple DIDs and so it can do what you describe:

Sticking to your example, you make a “student”, a “naturist” and maybe an anonymous DID.
And so the user has full control which is also the idea of “euID”.
I am curious if the UK will support it …

So, this is technically the “ID module” which is recommended by W3C.
Anybody (not me) needs to convince the big player then …

However what you mention in (1) does sound like a bug to me:
It is not exactly “metadata”, it is about data you added and which describes a relation.
It is the rel="me" attribute in the link.
This one is explicitly added by the author to specify “I am also Bob at foo”
and if another rel="me" is found at the link target at ‘foo’ and is linking back then it is a mutual me link …

Thanks for this, yeah I am more thinking of more positive use cases for user ID verification. The government want this to deter people who abuse others from hiding behind anonymity

However this suggests everything is negative behaviour, where as to balance this there are more positive uses.

I think we should worry less about what the big players are doing , facebook are more interested in their Metaverse at the moment. And find ways as a network we can implement user ID the way that benefits us as a fediverse but also do what we do better.

It would be nice if I could get the mastodon verification to work so I can get a green tick. If I need to contact my instance owner and e-mail a copy of my ID this is fine.

If we can be seen to be pro-active, even if all instances don’t implement, then at least it looks good on us as a platform.