Webinar with the European Commission and AP Community

@j8ter I just notice that the NGI announcement doesn’t have the latest version of the image, without EU in it as Jean-Luc requested.

That is an oversight on my end, as apparently - after creating them - I forgot to upload the square variants of the images. So sorry about that. But it has given the opportunity to add the final title for the event.

Here are these versions in SVG and PNG respectively: 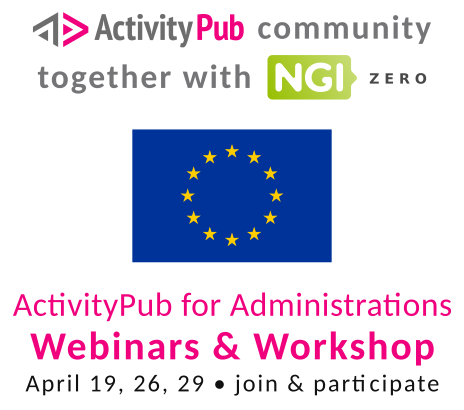 I just sent out another announcement toot. Boosts appreciated, or borrow the text: 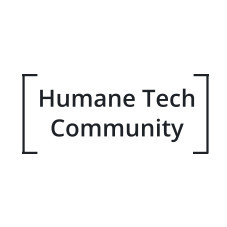 Dear Fediverse, we announce: ActivityPub for Administrations Our members at #SocialHub are very busy preparing for our European Commission events. In two webinars and a workshop we'll introduce EU representatives to @activitypub@gup.pe and its...

(PS. If you toot the published announcement page (/pub/) then there’s no preview image. Use the topic URL with /t/ instead)

Yes, and there’s another angle too: risk.

On the one hand the EU is trying to tackle big tech. After many years of downplaying the problem, it’s now recognised. On the other hand the EC itself uses these BigTech platforms themselves for comms work.

While no-one could expect them to stop using them today, it would send a clear political statement if the EC announced they are now posting to the Fediverse. And it would protect them from the risk of being accused of hypocrisy.

a big threat of people losing interest (btw, mostly this might happen in the discussion, if people come in with overly anti-capitalist feelings and uttering “underbelly” feelings on big tech).

That would definitely be something to avoid. Being seen as “techno cranks” (rightly or wrongly) would be the kiss of death. Eurocrats are risk averse.

If you read back nobody is pushing that agender as it clearly is inappropriate for this outreach.

I can only think you are bringing this up as “power politics” move, PLEASE stop with these microaggressions as they make us look like “techno cranks”. @mathewlowry and @aschrijver you guys are highlighting the gap between grassroots and burocratic working and communication - we need to build bridges not dynamite them.

Can we focus on “consensuses” and stop pushing agenders.

We have limited time to “herd cats” for a good outcome.

I’m sorry that’s the way you perceive me, Hamish. I still don’t know what agendas you’re talking about. I only got involved here because I want this to succeed and believe I have something to offer. Others seem to agree.

If there’s a gap between this grassroots movement and the way the EC should be communicated with, then I think highlighting that gap is a useful way of ensuring we don’t trip over it! But I’m not forcing anything on anyone: if what I have offered is seen as useful, great - if not, that’s OK too.

#activertypub like #RSS and the #www came out of grassroots movements, they bring world views with them its WHY THEY WORK. Yes the world view are in part incompatible with #mainstreaming, so the is a strong burocratic desire to hide these world views and then push them out of view/existence.

To get away from the “big picture” lets focus on this presentation.

The balance is the key, we have a good group here lets try harder/better and be nice.

I think I am being nice, hamish. I simply proffered my perspective and experience. I didn’t accuse anyone of playing power politics, or pushing agendas, or aggressing anyone. You did that. Please stop.

PS FYI, I published the EC’s first RSS and customisable XML feeds in 2002. It took me 6 months of patient explaining to get the Sec-General’s OK.

Its open to both world views, we need to find a good balance so the grassroots do not feel blatantly sold out and the Eurocratic do not get scared and run for their power politics bunkers.

So lets make this happen

We’re stepping aside to dislocate this polarization forced on us by centuries of power politics. By doing so we’re not characterizing our interlocutors as a uniform caricature, but recognize their diversity. By showing our unity in diversity we’re already impressing the EC, I can tell you that. We’ve had comments about how our organization of the Webinar is already very well appreciated in comparison to everything they’ve seen so far where people try pushing their own agendas. Let’s keep this in focus. Everyone in the room has things to gain from this liaison.

The reason I mentioned the point is not for the people involved in preparation right now, but for those unknown folks in the crowd that may be joining the webinar. This gives some requirements for the event moderation to take that into account. That’s all.

Let’s clear the “smoke” and get on with the balancing “showing our unity in diversity” where are we?

It’s not a bad presentation, just needs a few areas clarifying and then a polish, my thoughts.

OK we likely have other options on this lets here them.

I had @natacha on the phone earlier and she made a couple of worthy comments, that I’m vaguely paraphrasing here (sorry N., feel free to correct and expand):

Hello! Where was the meeting happening? I am trying to spot a link around here

I made an announcement on https://ps.zoethical.org/ with a special dedication to @hamishcampbell

Maybe another line alongside “were you hacked?” (cf Facebook leak) could be “were you FLoCed?” (see Am I FLoCed? A New Site to Test Google's Invasive Experiment | Electronic Frontier Foundation). Maybe invite them to check both after the webinar@

Noticed we somehow have lost the open/closed/open simple metaphor.

Can we get it back

“After the Web Enclosure” change back to “The closed web”

The ending is still damp, looks too much like it was writern by committee.

My though is maybe a bit “militaristic” but it has heat, more hot ideas?

"ActivityPub and the EU

It’s a good fit both strategically, in challenging the big US tech corporations dominance and tactically, in it being simple to implement and open to innovation as it is outside of anyone group control and agendas.

In tomorrow’s workshop let’s look at practical small steps to make this happen."

I rather like your explanation, it might be good to directly address the EU/US/China rat race, which would be familiar and relatable for EC policy people (it is a bit polarizing/generalizing though, if worded too strongly). The workshop would be the third event, so the sendoff could be something like: “In the upcoming webinar and workshop let’s look at …”.