On HN I just bumped into The Block Protocol | Hacker News and an introductory article by Joel Spolski about it:

Making the web better. With blocks!

You’ve probably seen web editors based on the idea of blocks. I’m typing this in WordPress, which has a little + button that brings up a long list of potential blocks that you can inser…

Mostly the protocol seems to deal with plain JSON and JSON Schema, but there’s also ways to refer to a JSON-LD mapping: 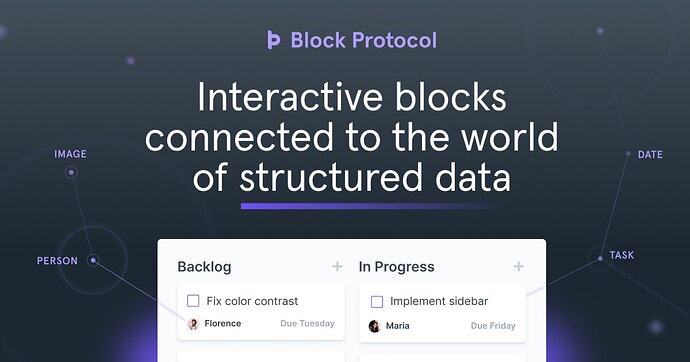 An open standard for data-driven blocks

We want to fit into the existing semantic web tech rather than reinvent it - there’s a FAQ here which hopefully helps to clarify: Block Protocol - Documentation

Looks interesting, thanks for the share. From the site:

How does the Block Protocol relate to JSON-LD?

We encourage applications to include JSON-LD describing entities on their public pages to make them machine-readable.

In theory, the Block Protocol could use JSON-LD as the format in which entities are passed between applications and blocks. We did not pursue this because we believe it will be easier and more scalable to handle links between entities outside the JSON for the entity itself, as described here. We have also taken a different approach to identifying entities, which may not have a public URI and may require a combination of fields to identify.

I’ve looked through all of this now, and I have been pleasantly surprised

As someone commented to me: “as always some good ideas and some not so good” – I’d say that’s a fair appraisal

The idea of styling objects is cool. The JSON compatibility is nice, tho some reinvention. Use of JSON Schema could be really useful, but I’d have to test drive this to work out where the pain points are

Overall a nice thing. There’s quite a bit in there that I’ve been wanting for some time. My feeling is to go through it and take the best bits, use them, play with them etc.

Thanks again for sharing this!